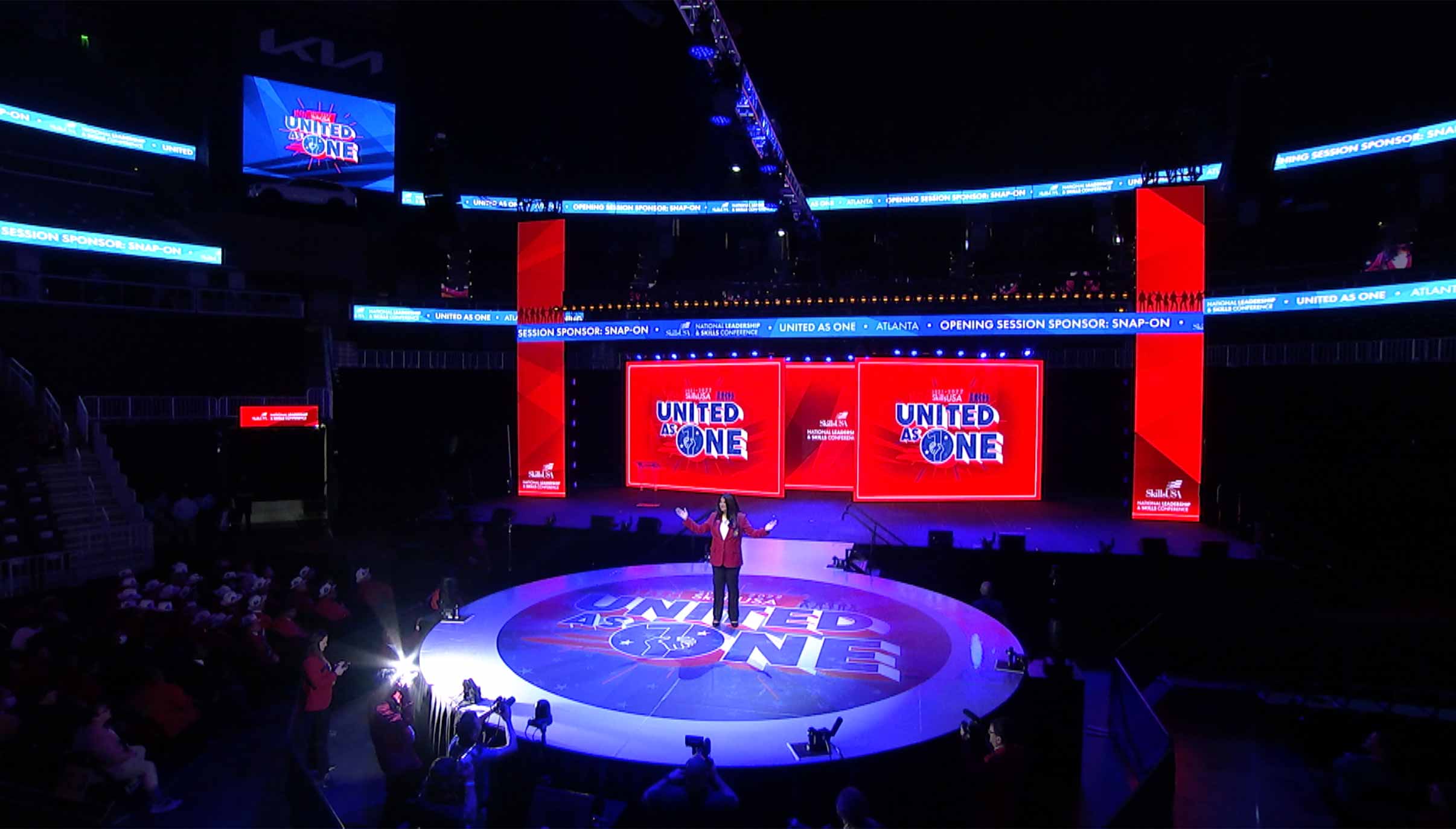 White Tie Productions was thrilled to partner with SkillsUSA for their 2022 National Leadership and Skills Conference.

This premier conference brought together over 12,000 of the best and brightest students from around the country in Atlanta, GA as they network and compete in trade-skills competitions judged by industry professionals. White Tie supported three General Sessions in the State Farm Arena - an Opening Session, a Recognition Session including a performance by international recording artist, Flo Rida, and a Grand Awards Session with hundreds of student awards presented - as well as provided support for 40+ breakout rooms in the Georgia World Congress Center. 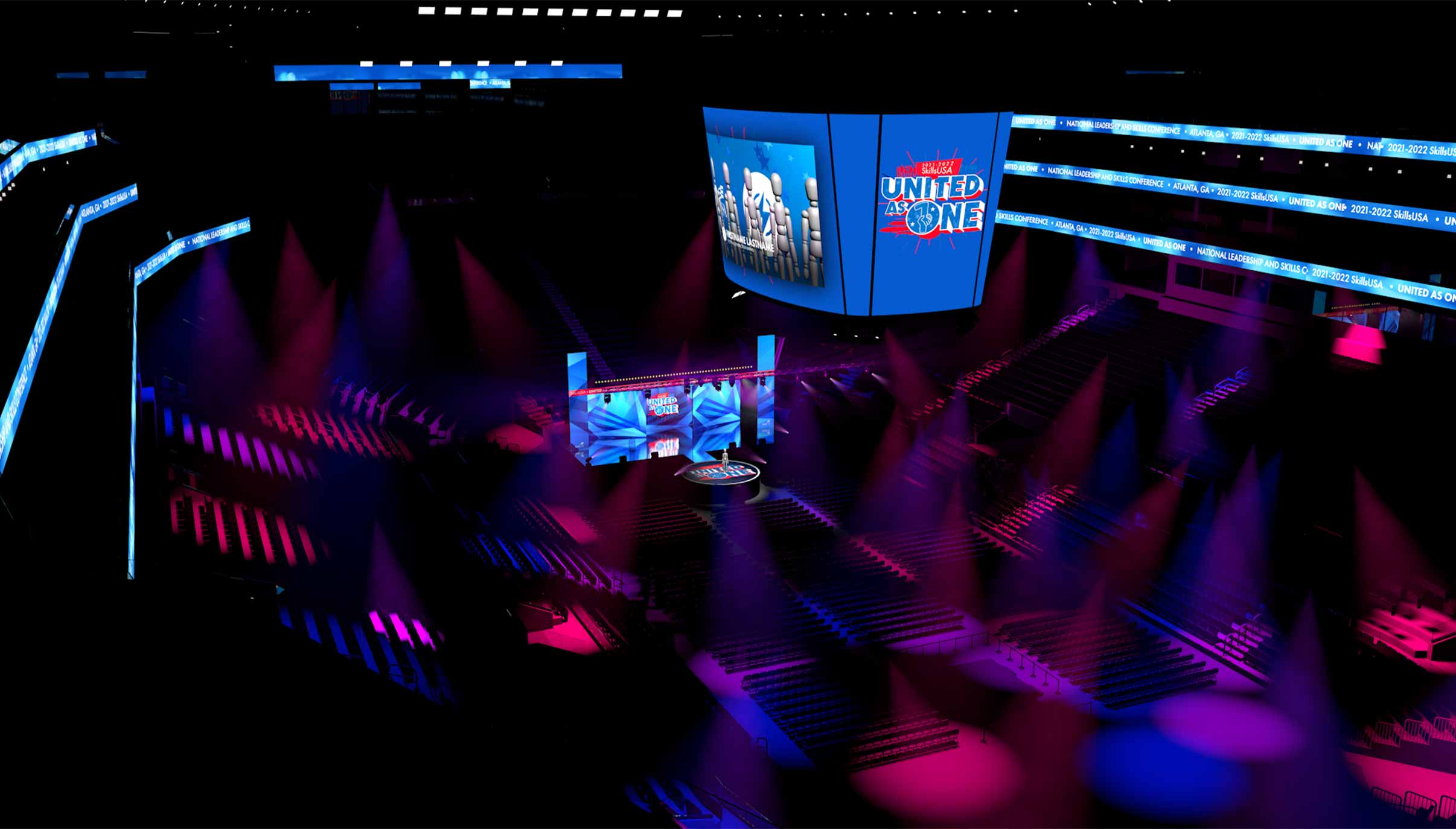 Starting 18 months out, our team collaborated alongside SkillsUSA to conceive and design a stage render and floor-plan that emphasized these three key goals: Inspire their audience with a breathtaking and broadcast-grade stage set, maximize available seating in the venue, and ensure the floorplan allowed the event to run smoothly while adhering to best safety practices.

During this development process, our design team was closely involved and was able to share conceptual graphics mockups as the stage renders developed. This allowed our team & SkillsUSA to conceptualize how the LED canvas would eventually be used to present their brand and content.

Our pre-production continued extensively leading up to the conference. This included:

We utilized our proprietary scripting software to create a comprehensive and easily navigated event script for each of the three shows. This allowed us to collaborate with multiple departments and ensured everyone was on the same page from the earliest possible stage.

After SkillsUSA provided drafts and content of all scripts, our stage manager and production staff worked closely with their team to review and finalize spoken content as well as lighting, audio, video, and graphics cues to bring their vision to life. This included finessing the staging and presentation positions based on our graphic design and camera placement to maximize the impact their VIPs had on stage.

At White Tie, we believe sound is half of what you see. After receiving the script outline from SkillsUSA, our audio designer curated a playlist tailored to each section of the script, choosing audio tracks that underscored and complemented its intended emotion.

By building and integrating reference tracks for this music within our script, we had the opportunity to collaborate with SkillsUSA throughout the development of each show. 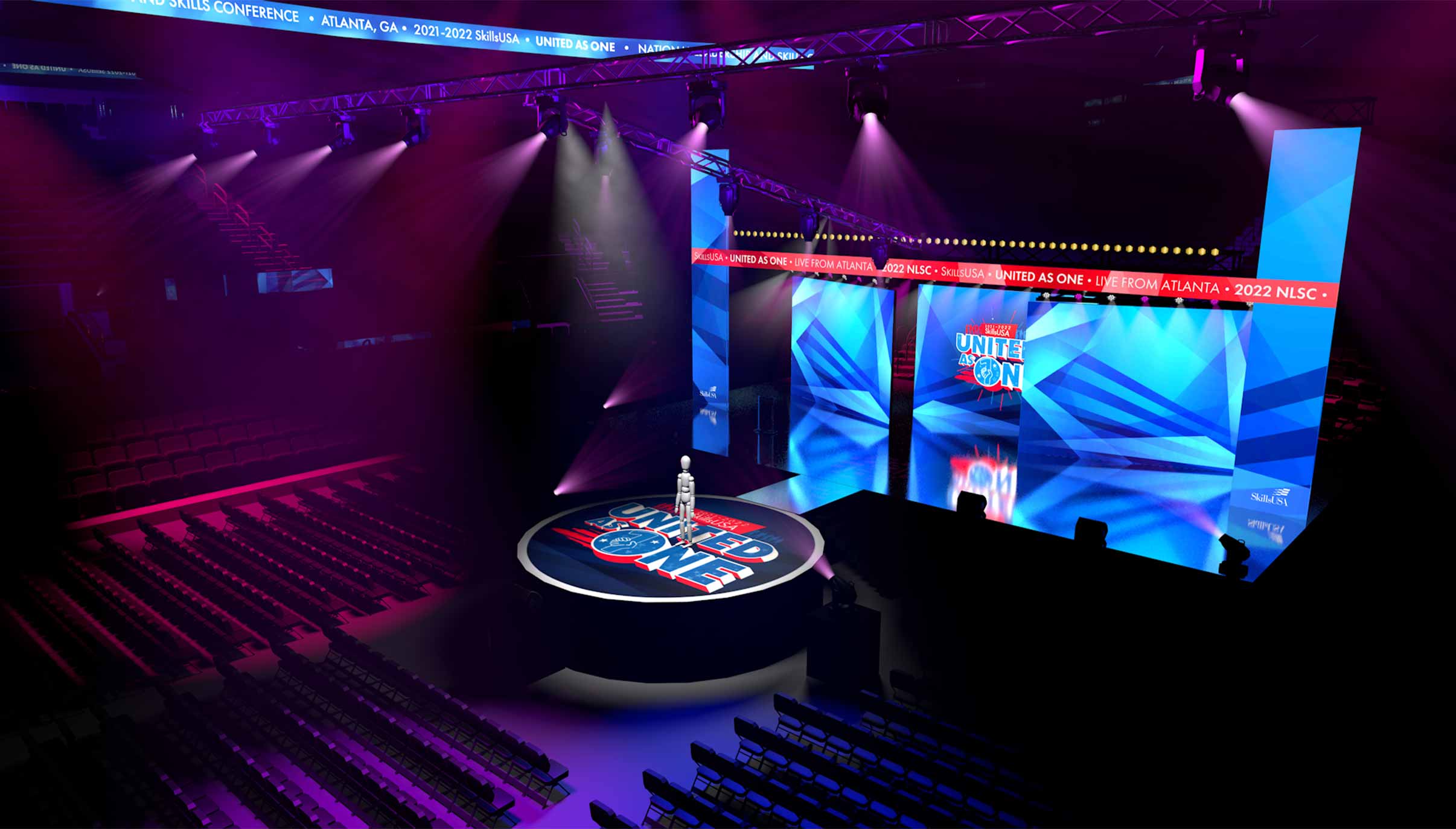 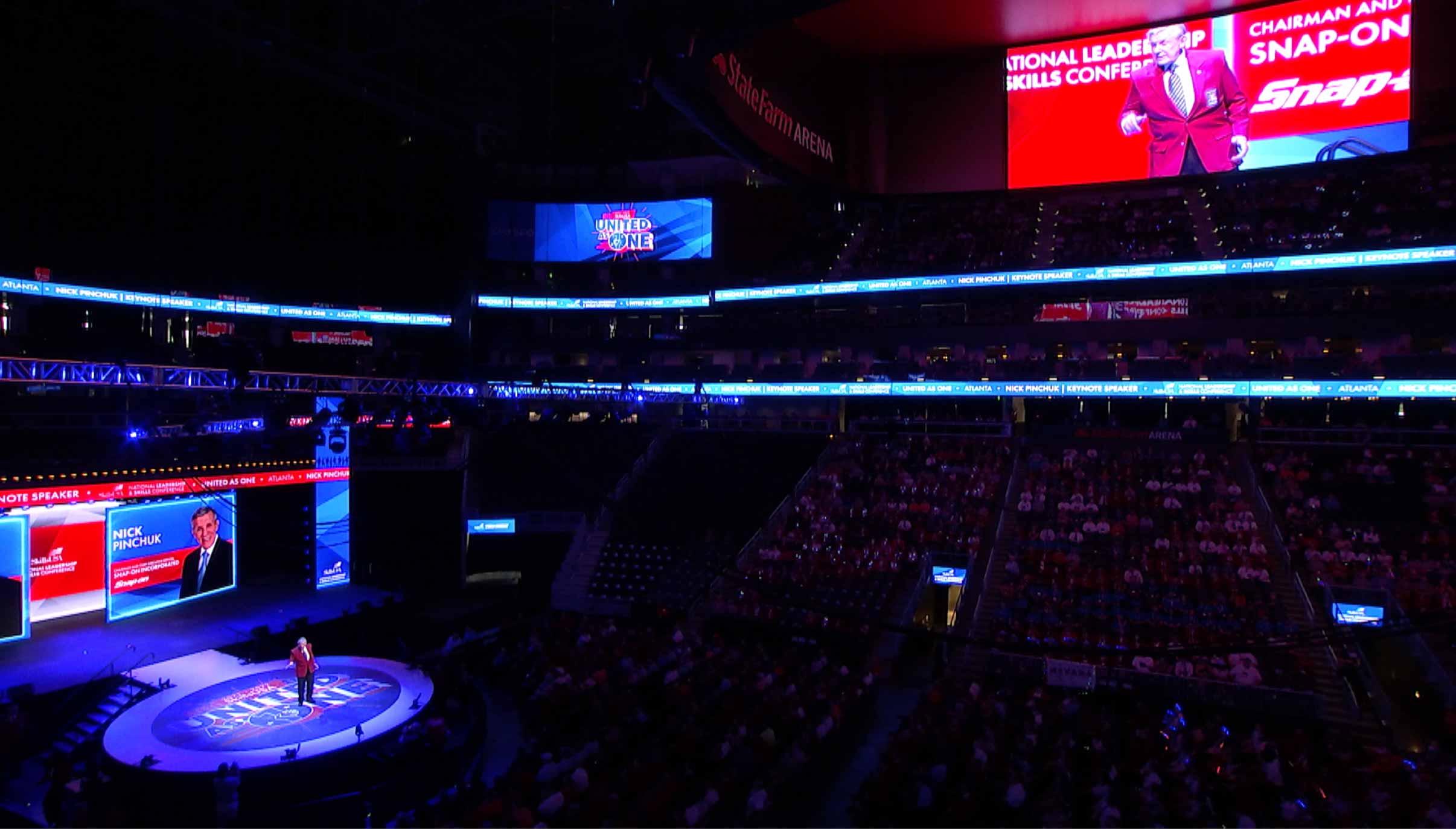 In addition to our all-LED stage design, our team designed and executed a total takeover of the LED screens within State Farm Arena. This included, but was not limited to the center-hung jumbotron, multiple stories of banner ribbons and vomitorium signage. In total, over 16 million pixels were driven by our Watchout and Resolume media servers.

As part of this package, we delivered hundreds of animated graphics, immersing the audience with on-screen elements that came to life and seamlessly transitioned throughout every session.

Prior to the conference, we delivered five custom videos to introduce special award sections. This work included scripting, voiceover recording, motion graphics and editing. On-site, our team filmed b-roll during all conference events, competitions and sessions to complete a recap video that played during the final conference session. 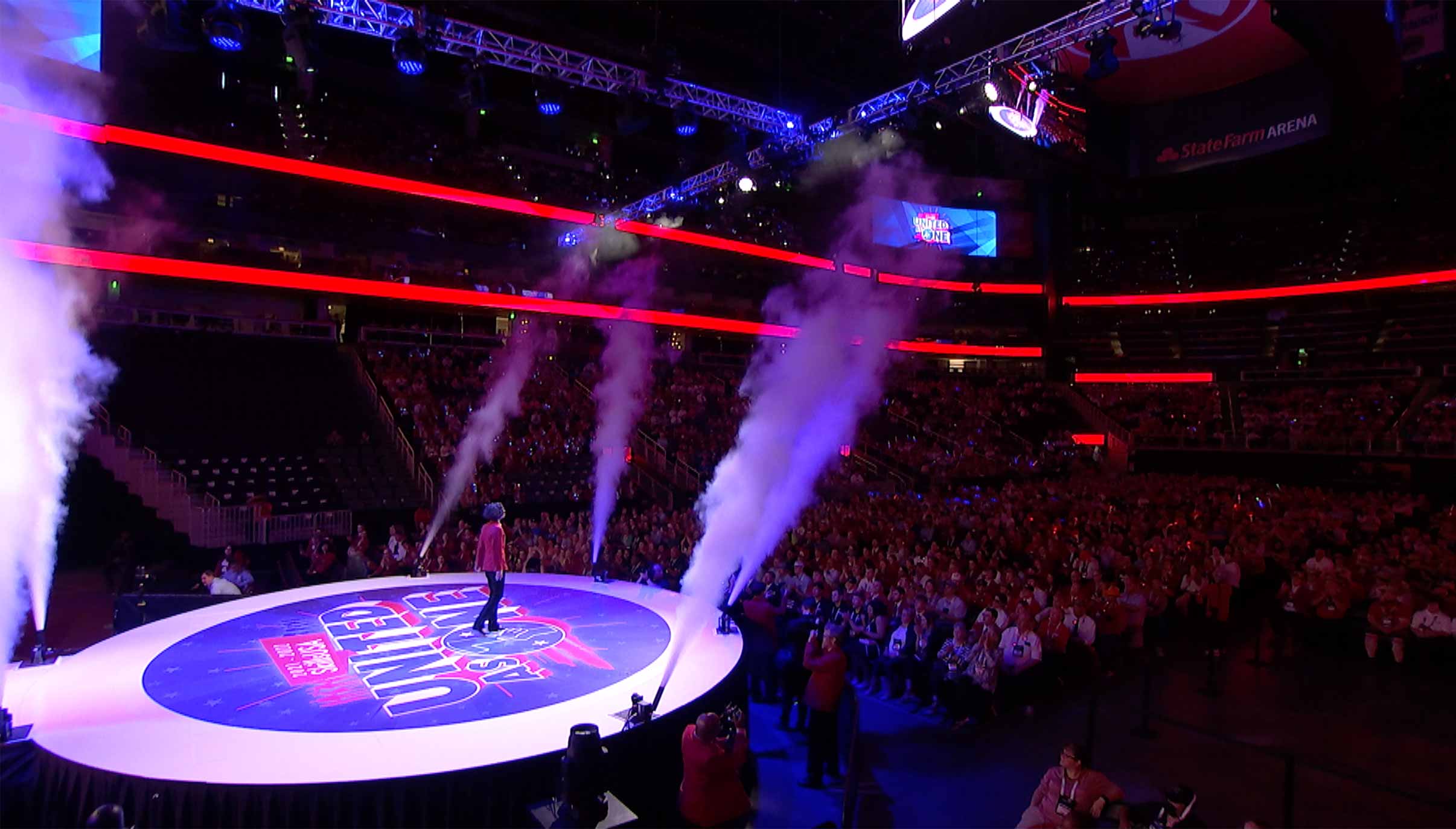 While great visuals can speak volumes by themselves, we take great strides in providing the best audio experience for our audiences.

No show is complete without lighting and special effects. Our lighting team designed a custom rig featuring over 100 fixtures plus a takeover of the arena lighting rig to add an additional 30+ fixtures. This was topped off with a CO2 cryo special effects package featuring cannons lining the front stage edge. 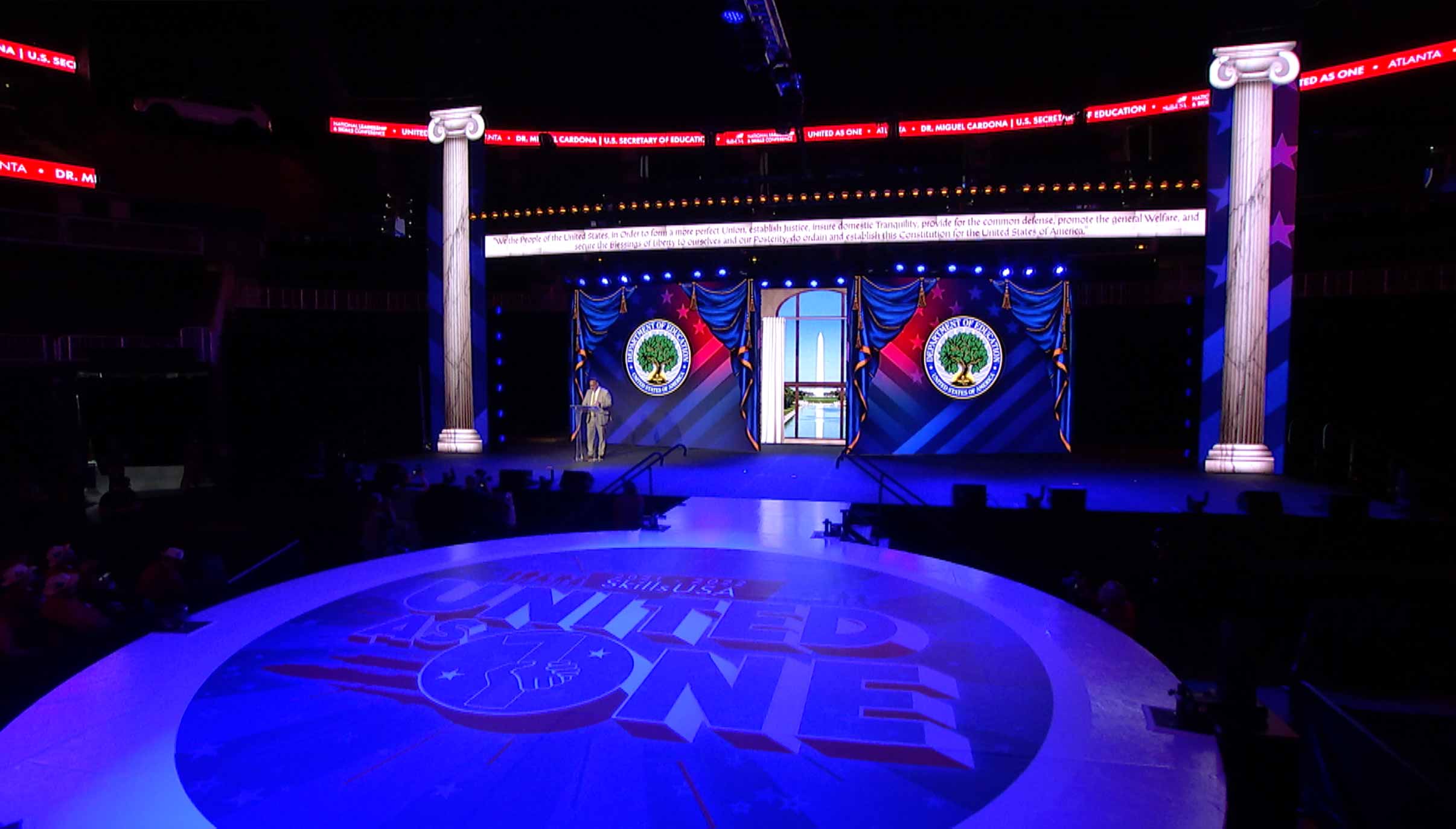 Before arriving at the show site, we sent a pre-con team to meet with the client and client talent to preview show assets, rehearse the script and practice key movements. This led to an increased understanding of the production as a whole and cut our rehearsal needs on-site in half.

We coordinated live pre-show interviews that gave attendees the “red carpet experience” and a chance to be featured on State Farm Arena’s jumbotron.

As the primary production company for the entire conference, our team handled the logistics for gear between our two offices and partner vendors moving equipment between conference locations in the arena as well as Georgia World Conference Center. This included equipment rental coordination, breakout room setups and management, and general technical support for all three buildings at the GWCC. Our team ensured each convention element was executed at the highest level. 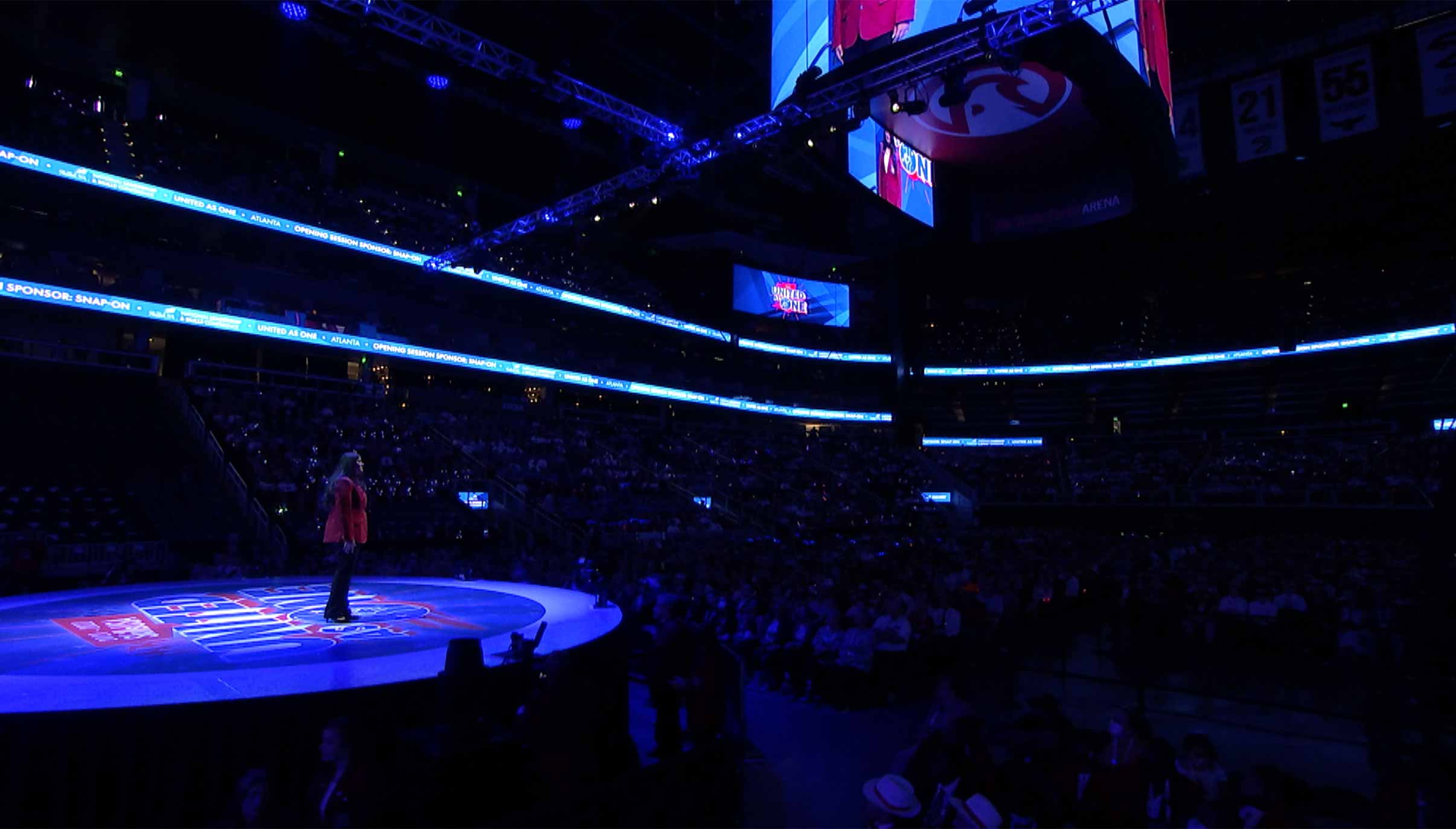 The breakout rooms presented a location for continued education as students continued to polish their skills. The main stage allowed us to recognize their important work with awards and to celebrate their commitment to the SkillsUSA mission. Ultimately, White Tie Productions was able to produce a seamless, cutting edge production that inspired a generation of SkillsUSA members. 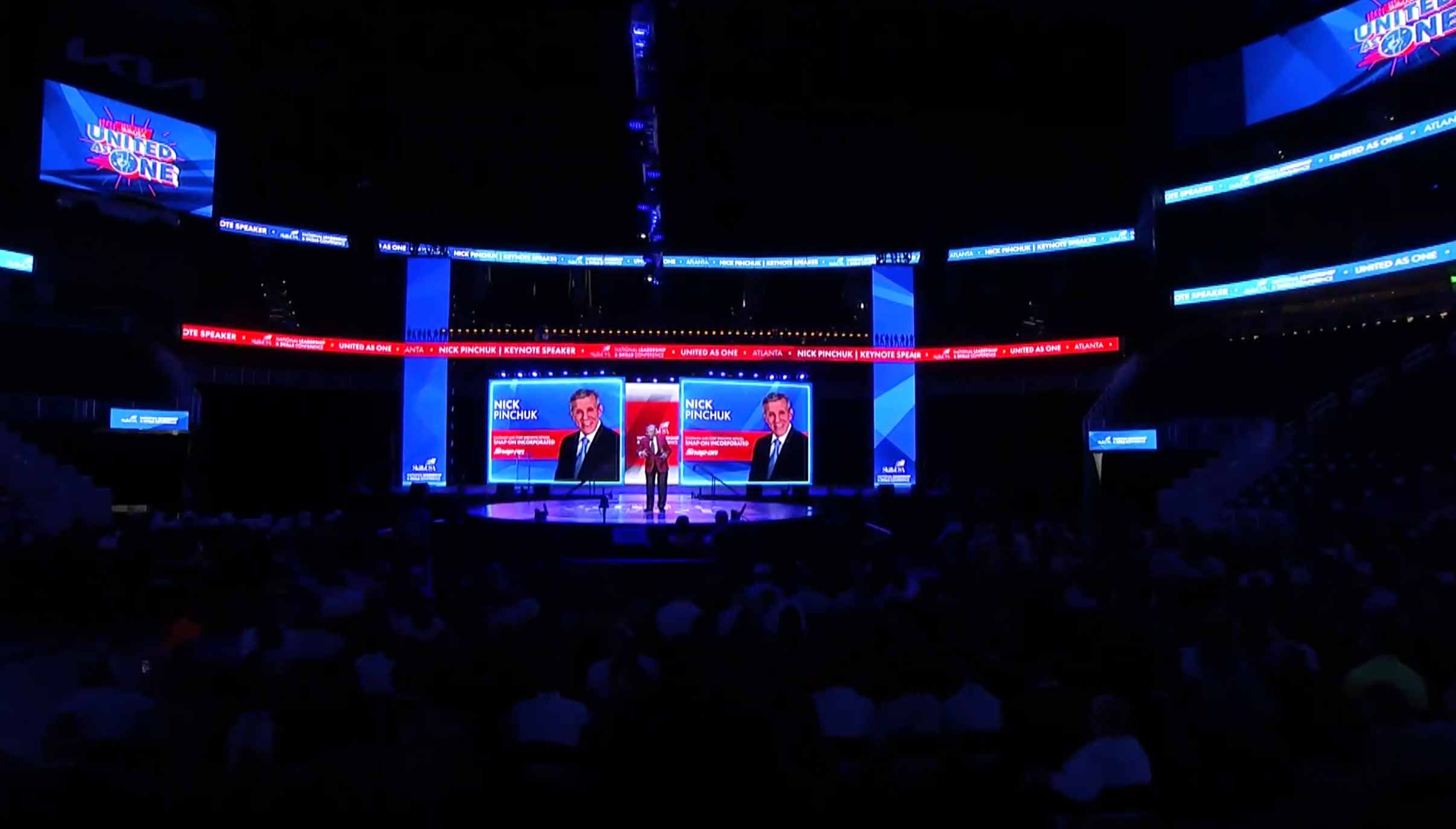 Thanks, your message has been sent to us.
Error! There was an error sending your message.